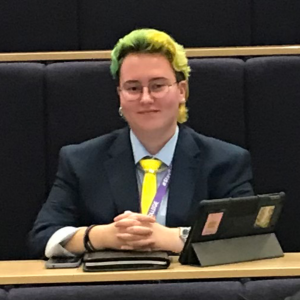 Ahead of their debut EP, Eyes Half Shut catch up with Lloyd FM to discuss new music, inspiration, and the impact of COVID-19.

MADE UP of three school mates from Hertfordshire, Eyes Half Shut are young and passionate musicians. Drummer Oscar teamed up with brothers Teddy and George to form the band back in 2018.

Oscar had approached George after being told he could sing, and he asked whether he would want to jam sometime, and of course he couldn’t leave out his brother Teddy, who was then recruited as the guitarist.

Although, they haven’t always been called Eyes Half Shut- when they first formed they were called Broken Sync; but after a line-up change, they decided it was best to rebrand.

“The name was from a poem called ‘The View from Halfway Down’; we originally were going to call ourselves Halfway Down, but Teddy was listening to a song called ‘Eyes Shut’, and kind of blended them” Singer George explained.

They love to source inspiration from their favourite bands and songs. Their debut single ‘The Bends (No You Don’t)’ pays homage to their love of Radiohead.

George is influenced by pop-punk bands such as Green Day, Teddy loves Muse, Radiohead, and Jeff Buckley, and they all have a deep appreciation for classic bands like Queen and Led Zepplin.

When asked if they could compare their own music to that of another famous band, Oscar said: “I feel like the riff in a song, we haven’t released yet, Ghost Pain, that was almost a bit Radioheadesque.”

George followed: “Weve got like that indie, indie-popness that comes from me, and the slightly heavier sounds that Teddy likes, and you know it kind of gets mashed together. I would find it hard to put a finger on.”

As they currently only have two songs released, it can be hard to categorise them, but they are happy leaning into the indie label, and hope that they can write music that appeals to everyone a little bit eventually.

The Bends (No You Don’t) was released in February 2021 and was well received by their fanbase. It hit 1000 streams within a week, and since then it has grown as well as their following.

Their second single Star Crossed Lovers was released on May 14 and had over 500 streams in five days.

You can find the boys on all major music streaming platforms, as well as on their YouTube Channel, where they post covers, originals, behind the scenes videos, and Q&As.

They also have a big presence on Instagram, @eyes_half_shut, where they post updates, interreact with followers, and most importantly have fun.

As they all contribute to the song writing process it provides them with a variety of sounds and subjects in their music. George told me that he gets a lot of his inspiration from what goes on within his own life.

“My first few songs have been about rejection…”

According to their lockdown music video for the song, “The bends is about seeing the writing on the wall of a failing relationship. It’s about wanting to feel ok again.”

Teddy wrote a song called Sleeping Pills throughout lockdown, about his experience of feeling bored and alone, unable to sleep.

Covid-19 has had a huge impact on the music industry, but small bands have had an unseen opportunity to knuckle down and write and release their own music.

George explained: “I think it’s a bit of a double-edged sword really. Cause you’ve got on the one hand, we’re quite lucky because we can just off and record because we use our dad’s studio. So, I think our songs wouldn’t have been anywhere near being finished now, if it had not been for lockdown. But also, we haven’t been able to gig, we haven’t been able to rehearse. It’s like both really good and bad in different ways.”

The boys are incredibly lucky- George and Teddy’s dad owns a recording studio in Welwyn Garden City, so they have had access to professional equipment throughout lockdown. Oscar has been drumming from home and was able to record the drum tracks in one day when the restrictions were eventually lifted:

“I think what we did was really making the most of opportunities. When there was a lift in lockdowns between the second and third one, we made the most od that by going to the studio and banging out a while day of drum tracks, and I think also just learning to do a lot of stuff self-sufficiently.”

Teddy reassured any budding artists that they still have the same opportunities: “You don’t need loads of equipment to record your band, there’s so much you can do with a laptop and a microphone, and it’s not to be overlooked. Many great artists just produce their music in their bedroom.”

“It’s all a process and about having fun…”

As covid restrictions lift the boys are ecstatic to be able to gig. You can find them at the Half Moon Inn in Bishops Stortford, Hertfordshire, on July 31.

What you need to know!

For fans of: Radiohead, The Strokes, Arctic Monkeys, The Killers

Hear: The Bends (No You Don’t)

Don’t Miss: The Horn at the Half Moon, Bishops Stortford. July 31. Supporting Darlings and  RAMONA MARX.

All photos are my own, or obtained with permission from the band